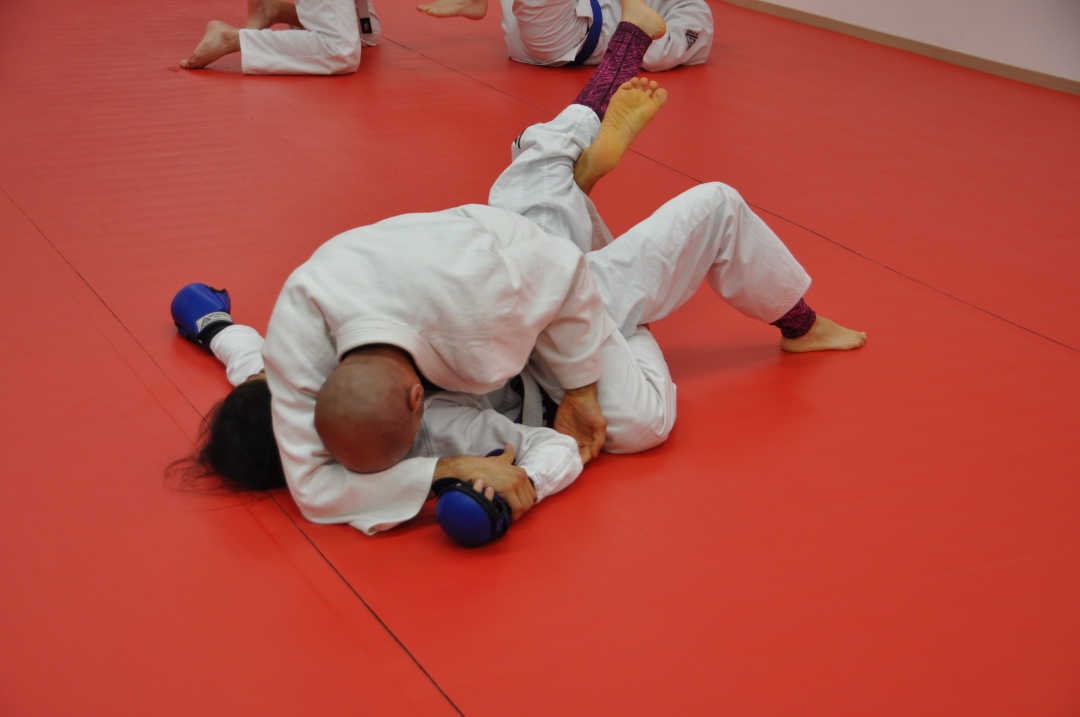 If you train Brazilian Jiu Jitsu for self-defense, especially if you are at a Gracie Certified Training Center, you are going to incorporate Fight Simulation classes into your training.  But what is a Fight Simulation class?  First of all, this doesn’t happen on your first day in a BJJ school (or shouldn’t at least).  It’s often the culmination of the beginner self-defense curriculum where students learn to use the techniques they have learned in all possible combinations to defend themselves against a larger, striking opponent.  I like to use the analogy of learning to drive, which many people can relate to.  You don’t show up to your first driver’s education class and get handed the keys to a car and go drive on the Beltway- that would be a recipe for disaster!  So, in terms of BJJ, think of Fight Sim class as the ‘behind the wheel training’ part of learning to drive.  The more hours you log ‘behind the wheel’ the more prepared and comfortable you are to actually drive by yourself.  By the time you are doing the Fight Simulation classes, you have a solid foundation of techniques and you are slowly learning to integrate them in an unscripted simulation of movements and patterns that a street fight is likely to follow.  After all, that is what self-defense is about, isn’t it?

So why do we do Fight Simulation classes? I totally understand that 99.9% of students who walk into a martial arts school have no aspirations to be a professional fighter.  And to be clear, Fight Sim is NOT MMA training (hence the Simulation part of the name 😊).  People aren’t getting bloodied up and knocked out, and if done correctly injuries are almost non-existent.  However, the training is still incredibly useful in preparing for a real self-defense situation.  Fight simulation training is designed with several specific objectives in mind, and here are three of them:

Become comfortable in unpredictable self-defense situations.  Once you have internalized a technique, it becomes almost reactionary- you don’t have to think very much about it, you just do the right technique at the right time.  You allow an unscripted simulation to unfold, where the bad guy has certain parameters to follow, but can change what he does in a random order (including throw light punches).  By doing this you ensure that your level of internalization is enough to allow you to use the techniques you know to defend yourself if the need arises.  However, managing intensity is the key to continued learning and injury prevention.  You start driving a car in a parking lot, then go to a neighborhood street, then maybe a road with traffic lights and so on.  It’s a good long while before you’re navigating rush hour on 495 or taking a road trip across the country.  Start slow and build your comfort level gradually over time (lots of time!).  If you see someone really ‘going at it’ in fight sim you can be sure that they have been practicing a very long time to reach that level, and it’s also not required that everyone end up at that same level.  That’s the beauty of this class- it lets your skills grow at a manageable pace to a place where you are comfortable.

Learn to identify positions and ranges where the bad guy can land significant strikes.  BJJ has over 600 techniques, but a few are at the top of the list when it comes to street self-defense.  On the other hand, there are many techniques that are elegant and amazing, but are applicable to sport jiu jitsu only.  It’s critical to know which techniques are useful for self-defense and which are not.  With enough practice many of the ‘sport’ techniques can be used effectively in a street fight, but that’s only after years and years of perfecting those more elaborate techniques, and most beginners should be able to defend themselves against a street fight opponent after about 12 months of training.  Allowing the bad guy to simulate strikes on the ground also reminds you to keep your technique sharp and crisp.  For example, there’s a reason we talk about head control so much 😉.  If your technique isn’t on point you generate opportunities for damage to occur.  If you use techniques that aren’t very punch safe, you generate opportunities for damage to occur.  If you take too much damage, you get knocked out and loose the fight.  In self-defense, we aren’t trying to ‘win’ the fight, we are trying to ‘survive’ the fight.  The goal is not to inflict maximum damage against a bigger stronger opponent, it’s to control them and avoid absorbing significant damage, and eventually exhaust and then choke or submit them.  Fight smart, not hard, and avoid being knocked out no matter what!

Unused skills atrophy over time and become less reliable.  In the Gracie Combatives Curriculum, White Belt is focused exclusively on street self-defense.  After completing the beginner curriculum though, a whole new world opens up involving more advanced techniques and the incredibly fun aspect of training known as sparring.  It is critically important to remember however, that nothing in BJJ gets ‘replaced’ as you move up.  You only ‘add to’ your tool belt.  Just because you know how to submit a higher level belt in gi sparring (or even no-gi for that matter) doesn’t mean that you can stop training the fundamental self-defense aspect of the art.  If you train only with partners who give you behaviors of a skilled BJJ opponent, you become very proficient at grappling with another BJJ practitioner.  But the guy on the street who is 50 lbs heavier than you and has never trained a day in his life is probably going to do something totally different, and may be quite a bit more elusive to handle than you’d think.  Doing Fight Simulation classes on a regular basis keeps that most fundamental of swords razer sharp, and will allow you to defend yourself when you need it on the street.  Self-defense isn’t like riding a bike- you WILL lose your level of skill if you neglect it.  It’s a lot more like owning a car- it needs maintenance to keep it in good operating condition.

The bottom line is this- the best way to prepare for self-defense is to put yourself in self-defense situations until you are comfortable defending yourself against an opponent who has the ability to throw strikes.  That doesn’t mean go to the bar on UFC night and test your skills (yikes!), it means using Fight Simulation classes to build your confidence and competence in how to defend yourself against someone who doesn’t have to play by the same rules as you.  After all, isn’t that why most people start training in the first place?